You Knew It Was Coming

One thing about democrats, they’re nothing if not predictable. Anytime they’re faced with an opponent who isn’t willing to play by their rules the smears start. In the 2008 republican primary Herman Cain found himself leading. Voila! Four women came forward to claim he sexually harassed them. The media ran more than 100 pieces in a 24 hour blitz. He dropped out of the race and the paid whores melted back into the woodwork, never to be heard from again.
One day AFTER the deadline to have a candidate changed on the ballot, Rahm Emanuel revealed that congressman Mark Foley had sent a suggestive e-mail to a young House page. He was never heard from again. They tried it with Gary Bauer, but he was such a minor distraction nobody saw him as being capable of having an affair.
Now comes the sickening part. Judge Roy Moore, a true conservative and a man of God, bested McConnell/RINO/democrat-backed Luther Strange in the primary for the special election to be held December 12. The polls show him with a substantial lead, so out comes a woman who claims he acted indecently toward her 40 YEARS AGO. Nothing had been mentioned in all that time he spent on the bench of the Alabama Supreme Court or during the runup to the primary. The usual suspects raised their worthless voices for him to drop out. You know their names: McConnell, McCain, Graham, Flake, and Murkowski. What remains to be seen is whether the voters in Alabama will be fooled by this obvious hit job. What is certain is that the media will engage in a relentless attack for the next month. It’s what they do. 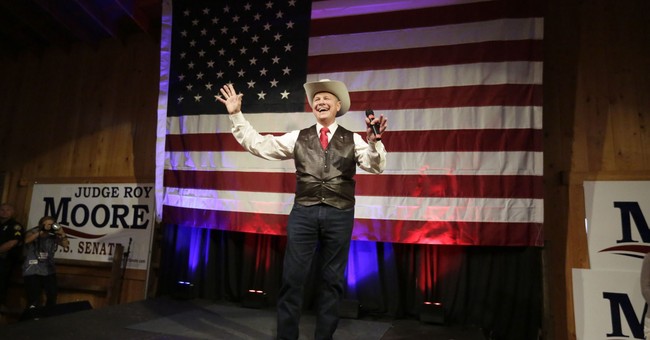 Aside from Corfman, three other women interviewed by The Washington Post in recent weeks say Moore pursued them when they were between the ages of 16 and 18 and he was in his early 30s, episodes they say they found flattering at the time, but troubling as they got older.
https://townhall.com/tipsheet/guybenson/2017/11/09/roy-moore-allegations-n2407315

Mark Levin told his audience on Thursday this whole thing doesn’t smell right. This story was planted and perfectly timed in their hopes to doom Moore’s campaign.
How did the WaPo know there were four women, who they were, and how to contact them?… A Washington Post reporter just happens to be in Alabama talking to Roy Moore supporters… And he happens to hear what no one has reported in 38 years, no political opponents – No one… That Roy Moore, 38 years ago, made advances to teenage girls.
http://www.thegatewaypundit.com/2017/11/mark-levin-exposes-wapo-hit-piece-judge-moore-complete-fabrication/

Roy Moore defeated Sen. Luther Strange (R-AL) in the primary run-off in September to replace former Sen. Jeff Sessions (R-AL), who now serves as U.S. attorney general.
The Roy Moore campaign said in a subsequent statement that if the allegations were true, they would have surfaced during his previous campaigns. “This garbage is the very definition of fake news,” he added.
http://www.breitbart.com/big-government/2017/11/09/mcconnell-leads-establishment-republicans-effort-push-roy-moore-out-alabama-race/

Ms. McCrummen’s criminal history began with North Carolina Case # 1992 CR 00654, a violation of the Article 19 – False Pretenses and Cheats section of the North Carolina Criminal Code. Ms. McCrummen was convicted of a crime punishable by up to six months of imprisonment for writing a hot check that was deemed worthless.”
Is it possible a journalist with a history of writing fake checks could also write fake news?
http://gotnews.com/breaking-washington-post-reporter-behind-roy-moore-hit-piece-history-writing-fake-checks/

“If they believe this man is predatory, they are guilty of allowing him to exist for 40 years,” Henry told the Cullman Times. “I think someone should prosecute and go after them. You can’t be a victim 40 years later, in my opinion.”
“I’m not buying it,” he said. “It’s too easy for someone to make these accusations.”
http://dailycaller.com/2017/11/10/alabama-state-congressman-moore-accusers-should-be-prosecuted/

14 responses to “You Knew It Was Coming”