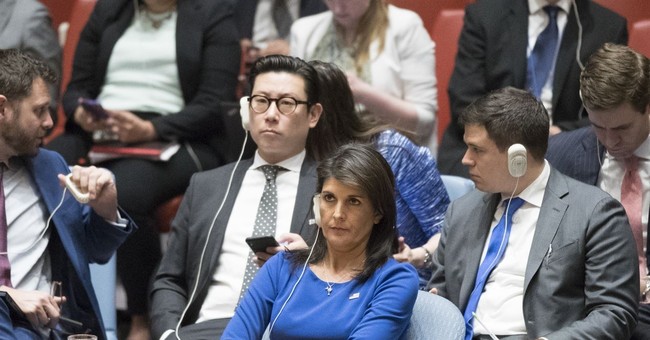 [CtH: Our ambassadors does NOT look happy!]

“The Security Council expresses its outrage and sorrow at the killing of Palestinian civilians exercising their right to peaceful protest,” it read according to a draft of the statement obtained by AFP.

It also denied the recent recognition by the U.S. of Jerusalem as Israel’s capital, saying actions “which purport to have altered the character, status or demographic composition of the Holy City of Jerusalem have no legal effect.”

You just gotta LOVE our Ambassador to U.N., Nikki Haley. First she speaks truth to power, “Hamas terrorists, backed by Iran, have incited attacks against Israeli security forces and infrastructure.” Then, when the Palestinian envoy started to speak to the UN Security Council session on Gaza, she walked out!

Comments Off on Get the U.S. out of the U.N.