What I know About Women

Any man who says he has women figured out is either lying or on very strong hallucinogens. Much of my knowledge of the species was bought and paid for through three divorces and giving away tens of thousands of dollars worth of stuff I bought but some divorce court judge figured I really didn’t need.
A couple salient points:
Never argue with a woman because you’ll never win.
If you try to say anything after she gets the last word, you’ve just started the next argument.
When speaking to young men about to commit marriage:
Learn a few short responses: yes dear; you’re right; I was wrong; I’ll try to do better.
Don’t ever think you’re punishing her by withholding sexual favors. She’ll have you on all fours begging before very long.

Story I heard long ago:

A Texan who stood about 6’5″ married a sweet young thing, all of 4’10”. On their wedding night they checked into the motel where he proceeded to lay down the law:
“What I say goes. You’ll have a drink ready and my dinner cooked every night by the time I get home. You’ll do what you’re told, when you’re told and no backtalk. I’ll give you an allowance to run the house on. Don’t ask for a dime more.”
She promptly took off her panties, a size 3.
“Here,” she said,”put these on.”
The Texan scoffed,”Are you kidding? I can’t get into these!”
“And that’s the way it’s going to stay until that attitude changes.” 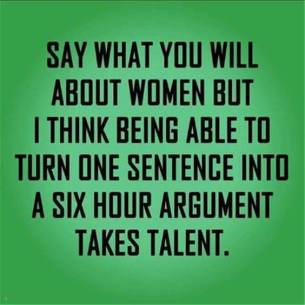 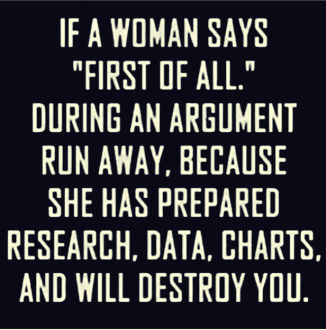 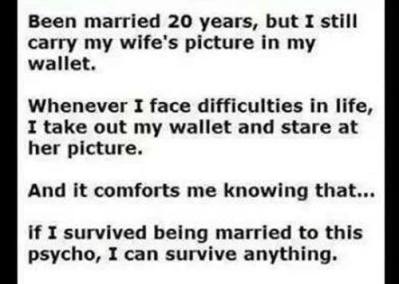 One response to “What I know About Women”